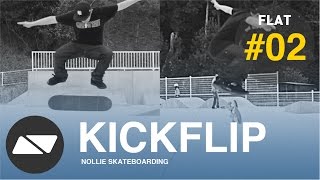 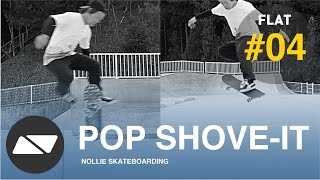 Varial Kickflip (Kickflip Pop Shove-it) is a combination of Kickflip and Pop Shove-it. It may look little complicated but not so hard if you learned both kickflip and pop shove-it. This is the best thing to try when you have gone though flat-ground basics and want to go little more tech.

How To Varial Kickflip?

Motion of varial kickflip is simple addition of kick flip and pop shove-it. Your back foot pops tail like pop shove-it and front foot flips board like kick flip. Let’s take a look at each steps.

Place your back foot like pop shove-it and front foot like kick flip. Your weight is on center of the board. Make sure your board is parallel to the ground.

Form And Where To Look

Upper body is another important factor of the trick. Turn your body forward like pop shove-it but little more sideward to add flip motion. Look around front foot ~ nose.

Pop tail with your back foot. This motion is totally same as pop shove-it.

Flip your board exactly same way as kick flip after popping tail. When to flick is right before your board start rotating. The timing is similar to normal kick flip so you can get it intuitively if you are used to doing kick flip.

Always Keep Your Board Right Under You

Look your board flipping and catch it in the air. Always Keeping yourself on the board is another important factor to get this trick.

How To Practice Varial Kickflip?

You will of-course need both kick flip and pop shove-it first. Skills of both tricks will decide almost everything. It shouldn’t take that long to get the trick if you are good at basis. Focusing on balance of both feet makes this trick higher.

Some great varial kickflips can be seen in Matt Field’s part in “Real to Reel” video released in 2001. He varial kickfliped over some objects. (0:31/1:50.) Varial kickflip looks great with stylish skateboarder like him rather than just doing it on big set or something.