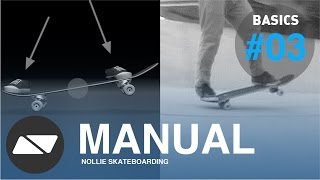 The nose manual is a trick best learned after becoming familiar with the tail manual. The concept is essentially the same, though it presents a higher challenge in that you are balancing on the front wheels while moving forward.

What is a Nose Manual?

How to Nose Manual?

The keys to the nose manual are similar to those of the manual. Maintain a centered body position as well as an equal proportion of pressure bearing down on each foot. Channel your inner awesomeness, keep it light, and keep it cool playa.

Basically invert the stance you practiced for your tail manual. Your front foot’s toes should be positioned on the nose while your back foot is placed over the back hardwares. Your body weight should be generally centered over the board. Keep your eyes focused about a foot ahead of the nose going forward as you gain familiarity with the technique.

Finding Pressure Balance on Your Feet

To measure how much pressure should be applied to each foot, move your body weight gradually forward and press down on the nose. Try not to lean forward too much, as it is preferable that you lose balance and touch the back wheels rather than lose your balance and bail forward. Keep practicing!

Controlling Balance with Back Foot

As opposed to the tail manual, where the front foot is the main source of control, during a nose manual it is your back foot which must commander control of balance during the technique. Shoulders and arms are again helpful as supplementary aids to help you maintain your balance.

Focus on Your Head Position

Start Looking Further Ahead as you Get Familiar with the Technique

Why not practice the nose manual in a similar way to that of the tail manual? Nollieskateboarding is stuck for ideas! Set distance goals then chart them progressively further apart! Be creative, have fun!

As with the manual, the most important thing is being prepared both mentally and physically (and spiritually!) to nosemanual before you land. If your weight is too far forward at the moment of landing, you may stick to the ground and bail, so be careful.

Q : "How to Dismount a Curb/Ledge from Nose Manual?”

First familiarize yourself with nose-manual to nollie on flatground, using the same principles as those found under ‘manual to ollie’ in the ‘tail manual’ tutorial section. When you reach the end of a curb or ledge in the midst of a nose manual, press your nose a little forward with your front foot, essentially doing a light nollie off of the curb/ledge.

First familiarize yourself with both nose manual and nollie kickflip. To be honest, this is getting into ‘not sure how much written instruction will be helpful to you’ territory. If you’ve come far enough that your trying to figure out how to flip out of a nose manual, you’re doing something right already. Keep at it, trust your instinct and your reason, and keep practicing! Nollieskateboarding believes in you!

Check out these pros of the nose man-u-al-o’s. In the ‘manual’ tutorial we video-referenced top ranked technical skaters such as Daewon Song, Joey Brezinski, and Rodney Mullen. Here we are going to reference a few more great skateboarders who have nose-manual proficiency! 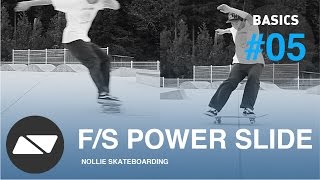