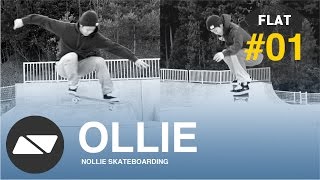 After getting used to doing ollie, you are going to get some new tricks to pick up and start practicing such as kickflip and pop shove-it. 180 ollie is another alternative you can pick. There are frontside and backside 180s and this tutorial will explain how to do frontside 180.

F/S180 (one eighty) ollie (or usually just called 180) is a trick both of your body and board spin 180 degrees toward heel side while you are doing ollie. It is not going to take long time to land F/S 180 if you have enough ollie skill. However, you are going to need much more time to make it high and steady. This tutorial will teach basics of doing F/S 180 and the key to make it solid.

The key for F/S180 is anticipation of your body which gives 180 spin to your ollie. Doing this motion without losing your balance makes your F/S180 high and steady.

Stance is basically as same as ollie but putting front foot little more toe side can make your spin little easier.

Look somewhere between where you are going to land and nose of your board. Do not change where you are looking until you land to keep your balance.

Just Before Your Body Anticipation

Turn your shoulders to opposite side of spin so you can get spinning power for your anticipation.

When you jump, turn your shoulders to side of spin. Following shoulder motion, twist your upper body until your body turn to forward.

Kick the Tail Straight Down

Make sure you are jumping straight up on #3. Kick tail straight down. Do not jump diagonally. Keeping your balance here gives height to your F/S 180.

This is another important thing to make your F/S180 steady. After body anticipation, try not to change direction of your body. You cannot keep your balance otherwise.

90 Degrees at The Peak

If you did a right motion, your board spins 90 degrees at the peak.

Spin the Rest With Feet

To keep your balance,use your shoulders and feet to spin rest of 90 degrees.

If you do not lose your balance while doing trick, you are going to land with four wheels. Your body naturally goes to the most comfortable form right after landing.

How To Practice Frontside 180?

Make sure you can ollie over at least one feet before practicing F/S180. At the first level, you do not really need to focus on keeping your balance and getting height. Just focus on your body anticipation and spinning. You can land your first F/S180 in few days. You may land with back wheels but it is fine. Get 180 spin first. After getting used to spinning, focus on your balance and try to land with four wheels. It takes long time to have solid F/S180 so after getting used to four wheels landing, you can go to next step and make your F/S180 solid through your skating.

F/S180 itself is a simple trick but it is a very important basis of Frontside Kickflip, Shifty, 360 ollie, and many other tricks. Andrew Reynolds is one of the top skateboarders and he has great talent of doing 180 type tricks. You can see his amazing talent in his videos. 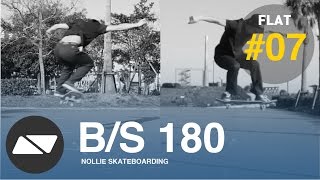