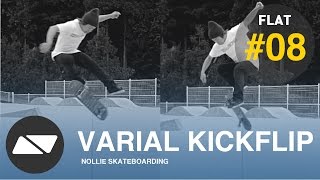 360 kickflip (a.k.a 360flip, Treflip, or Possible) is a trick spinning your board 360 degrees along with both horizontal and vertical axes. It is a combination of 360 pop shove-it and kick flip but way of doing is not just a simple addition of both tricks.

360kickflip has two keys which are…

1.Back Foot Motion
In 360kickflip, not only your front foot but also your back foot plays important role for adding kickflip spin to your board. The keyword is “scoop.”

2.Keeping Your Weight On Center Of Board
You can easily lose your balance when you are trying to rotate your board but you cannot catch your board as long as your weight is not at right position.

Let’s go though each step.

360kickflip has an unique stance. Place your back foot toe little over edge of the tail like you can touch side of tail with your toe fingers. Your front foot position is similar to kick flip but place little more backward and turn it to forward.

“Scoop” An Unique Back Foot Motion

Back foot motion is the most important element for 360 kickflip. It is more like “Scooping” tail than popping. Kick tail like hooking side of the tail with your toe and scoop toward diagonally front. Little more stronger than pop shove-it. It is hard to get but you will gradually get it.

Your board will get half or even full flip rotation if you did right scooping motion so your front foot does not need much effort to add kick flip to you board. Flick little bit right after back foot scooping pull up.

*Some people add flipping motion mainly with their front foot. You can see how much flip your can get from your back foot motion and adjust your front foot motion to it.

Keep looking spin of your board and catch it. At first, your board tends to goes wrong direction but this is usually happens because of losing balance. So always being right on the board is the key to your first landing.

How To Practice 360 Kickflip?

This may be the first trick spinning your board 360 degrees so this is not going to be as easy as other combination tricks like varial kickflip. You can take 3 steps to get your consistent 360kickflips.

It may take some weeks or months to get your first 360kickflip but keep on trying. You will gradually get it should turn out to be pretty easy once you get it.

360kickflip is very popular trick so you can see this trick in almost all skate videos. A great thing of this trick is it looks very different with timing, power balance and body motion. Every skaters do this trick differently. Remarkable ones are done with professional skateboarder Stephan Janoski. You can check out his steady light 360kickflips in videos below.